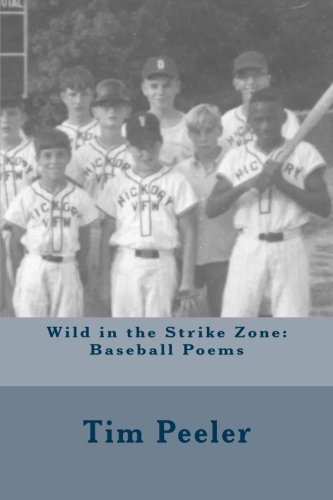 Wild in the Strike Zone: Baseball Poems is not about baseball, and yet simultaneously this collection of reflective letters to a younger version of a now grown-up boy is about baseball. Using such an easily understood and accessible theme, Peeler’s ninth full-length collection explores both the self and the feelings of those that came before, treading the line of nostalgia without quite crossing over into the realm of the ahistoric.

In the very first poem in the book, for example, Peeler describes the life of a man, presumably the speaker’s father, who drove a ‘Nash four door because it made sense / When you were picking up kids from church / And picking up kids for games and taking / Kids home from school’, elucidating the man’s reasoning for driving that specific car by noting it was because it was dependable and it was what a teacher’s salary and a preacher’s salary could afford back in those days. It is here the philosophical ideal of those days becomes so immediately obvious and potentially problematic: “Wild in the Strike Zone, 1965” sets the tone for the entirety of the collection, and Peeler could have easily allowed for a tone of demented nostalgia, a feeling summarized by the phrase back in those days and usually followed by the implicit or even explicit suggestion that those days were better days. Instead, the poem’s focus on cheap cars and poor salaries grounds the poem in the reality of those days, refusing to allow the reader (or, perhaps more importantly, the poet himself) to get away with thinking that we ought to make a return journey.

But that is not to say there is no desire to make such a philosophical return. Even in some of the darker poems in the collection, there is a trace of longing for times gone by, a hint of the regret we all sometimes feel for having grown up so fast. In “The Moon Wrestles the Sky Away”, Peeler epitomizes this feeling by creating two parallel images for the reader. First, there is the image of ‘you’ in the poem, sitting in front of the computer, as stunned as the day your father sliced the throat of the rabbit you held in your arms. Second, there is the image of ‘you’ standing at the pitcher’s mound, hearing the faint noises of the tiny crowd, the fainter noises of the surrounding nature, going into your pitch ‘As the moon wrestled the sky away.’ Peeler allows us to see the nuances of life in crystal clarity, and other poems, especially “1945”, “1961”, “Old Man Poems 1”, “The Natural”, and “Baseball Apostate” further this understanding of reality. Throughout the collection, Peeler makes clear that while life was not perfect, it was good. And, the poems seem to say, there is a certain unexplainable sadness to the fact that that part of life is over now.

While for the most part an excellent example of accessible and relatable poetry, there are a few issues with Wild in the Strike Zone that should be mentioned. The twelve poems contained in the “Hickory Rebels” chapter, while good poems, add little that is not found throughout the rest of the collection. A notable exception to this is “Rebels 5”, yet that poem has issues of its own: while historical accuracy is appreciated and noteworthy, I am not convinced of the legitimacy of Peeler’s usage of ‘negroes.’ “Rebels 5” is an incredibly powerful poem, yet I would suggest that the use of ‘negroes’ in the first line does more to detract from the poem by bringing to mind current-day discussions of race and political correctness than it does ground the poem in the gruesome reality of the twentieth century that Peeler is trying to discuss. Additionally, Peeler’s usage of enjambment throughout could create problems for some, as the line breaks often seem to serve no real purpose aside from the act of breaking the line, and they create a rather stilted reading experience in some places. However, if the reader is willing to follow Peeler along through his enjambment experiment, I think one will find, like I did, that the particularity with which Peeler breaks his lines create an almost dreamlike experience, further invoking the nostalgia so crucial to the collection’s success.

While Wild in the Strike Zone opens the reader to the idea of the collection being about baseball, it also makes clear that Peeler is using baseball to reach for something even more universal. As the final lines of the final poem says, “If it all must end, let the old curses / soar through the night forever.” Like this collection, life is not perfect. Not now, not then. But it was good. It is good.