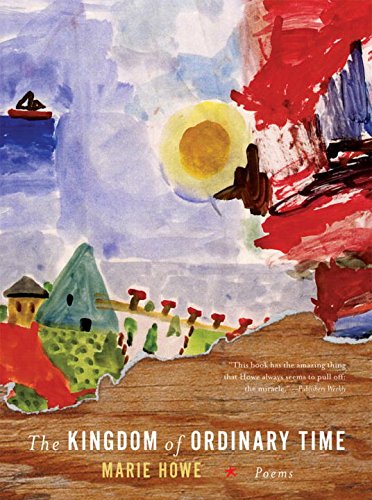 If I had to pick one word to encapsulate the chief emotion behind the poems of Marie Howe’s The Kingdom of Ordinary Time, I would choose “yearning”. Yearning for the time when we still believed in miracles, for things to slow down, for us to truly see and understand each other. Howe’s “Ordinary Time” is simply that of the everyday things we find ourselves doing, seemingly mundane, yet capable of inspiring wonder. Her poetic voice is one of a writer enamored by the world who desires to know its secrets, and who discovers them by looking at little moments. That yearning and philosophical depth Howe explores throughout the book can be summed up with her poem, “Limbo”.

Do I have an I? one says
to another who seems distracted, looking out what might have been a window.

What is the difference between a self and the soul?
Is it true that one god is in relationship to each of us?
Or is the each of us an illusion, and we are the god we are looking for?
That’s what the distracted one is thinking and what
she wants to know,

and she wishes that the other person would stop bothering her,
and she wishes she had more time to think about these things,
although she has all the time in the world.

While some of her pieces get a little too esoteric, this is beautiful in its clarity. Howe blurs the line between the spiritual and the corporeal, and makes you ask yourself about the last time you carved out time to think about more than just the dishes in the sink and what you need to do tomorrow. Each poem asks a question of the self and holds both faith and doubt in a neat tension. Howe is usually skillful at crafting thought-provoking lines without getting too obscure or impersonal (we have all been the speaker at some point). However, sometimes she pushes the line and meaning is lost; nice imagery will be tied to lofty thought, but unless it is somewhat anchored to reality, those thoughts float away like balloons into the sky.

My favorite poem in the entire book is “Easter”.

Two of the fingers on his right hand
had been broken

so when he poured back into the hand it surprised
him – it hurt him at first.

And the whole body was too small. Imagine
the sky trying to fit into a tunnel carved into a hill.

He came into it two ways:
From the outside, as we step into a pair of pants.

And from the center – suddenly all at once.
Then he felt himself awake in the dark alone.

We tend not to ask ourselves what it must’ve felt like for Jesus to return to his human body after being away for three days. To go from being interconnected with everything to essentially shrinking to a tiny pinprick within the whole expanse of the universe. Howe thinks about this, and captures the feeling with the striking line, “Imagine the sky trying to fit into a tunnel carved into a hill.” But I think this line resonates so much because it goes beyond biblical imagery. After all, there is so much more to us than our bodies, and we are each our own skies being fit into tunnels. Other poems, including “The Star Market”, “Why the Novel Is necessary but Sometimes Hard to Read”, and “The Spell” emphasize this. And if for no other reason (though there are many), that realization is why I would recommend this collection.