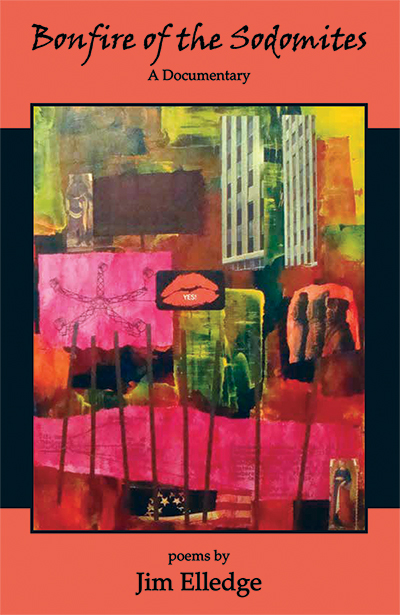 Content warning for quoted slurs.
“On June 23, 1973, someone set fire to the UpStairs Lounge, a gay bar in the French Quarter, killing thirty-two people in six minutes.”

The above quotation comes from Elledge’s prefatory note to readers. It’s a very simple reduction of the event—one that he goes on to unfold in this book like an origami crane of violence, not just of fire but also of human indifference. He describes this book as a documentary; the techniques he uses to make it one—found poetry, using quotations out of interviews & other public documents of the event, even including his Works Cited at the end of the book—succeed in that, crafting Bonfire as a panning, zooming, scrutinizing camera-lens of a book. A book, incidentally, that’s very difficult to read. While Elledge casts no aspersions himself—serving still as the indifferent camera-man—the most grotesque moments in the book have nothing to do with the fire itself and everything to do with the community reaction to the event. Take “Laugh Track” on page 54:

“What major tragedy
happened in New
Orleans on June 24?

That only 30 faggots died—
not more.”

“Just a bunch of faggots” is a repeating theme throughout every community poem. Preachers will not hold funerals. Those who try are flooded with hate mail. Children of the late men are harassed so much that they have to transfer schools. Elledge’s research here is impeccable; he analyzes every impact with a historian’s eye as much as a poet’s, and his voice is remarkable in its consistency yet malleability. Take the identification of the bodies in “Identifying the Dead”, pg 42:

The notes of slang are couched in business: not like the casualness on pg. 60’s “Dirty Little Secrets: The Saints”:

It’s in these manipulations of voice that the pain and horror in this poetic documentary really reside; appropriate, when this is so heavily comprised of community voices to speak about the event. Voice, however, isn’t the only remarkable thing here; Elledge also has a gift for images and setting scenes:

“When William White
and his friend arrived, thirsty for a pitcher
of Pabst, hungry for conversation…”

(13 Steps—12 Wooden, the First Concrete)
“…fire exploded
coating everything, everyone
with its slobber.”

(Seven Ounces of Lighter Fluid)
“…inside, men smashed the glass
Of the few windows that weren’t
blocked and, without wings, leapt.”

(After Luther Opened the Door)
“Hungry for conversation” keeps haunting me.

I first read this book in the summer of 2017, just a year after the Pulse massacre. It still weighed, and weighs, heavily on my heart as a queer woman—particularly in a political climate where a man who endorses incredibly dangerous, psychologically-condemned “conversion therapy” for people like me and discrimination as religious freedom is VP, where my trans friends cannot be sure of their safety just trying to use the bathroom and were nearly even excluded & otherized from that tremendous act of service in joining the military, where just after Pulse I saw exactly the same kinds of comments I’m reading in the Laugh Track poems among others—it hurts. It’s been difficult to come to this review with any kind of objectivity, because this book is so timely in its observations of people despite its focus on one historical event. Nothing has really changed. Even with marriage equality now the law of the land, so many people are hoping for it to be struck down by a new justice, still refusing to see lives like mine as inherently possessed of human value and dignity. This is such an important, difficult book to swallow. We are so hungry for conversation, for communities where we are safe, where we don’t have to somehow earn the right to live by living up to straight expectations.
This book brutalized me into catharsis; it broke my emotional bones to reset them where I’d let them heal wrong and mar my posture. It’s powerful. It’s not easy to read, the best poetry never is, but it’s powerful.