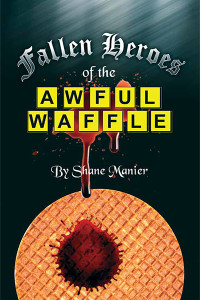 In Shane Manier’s debut chapbook, Fallen Heroes of the Awful Waffle, the reader first experiences Manier’s voice as that of an observer—perhaps an empath—who shares in the pain of humanity and later as a self-proclaimed hero.

The poet documents pain in others: pain in the waitress, “young, / and clawing / in her festering nest” (“Driving Back”), in an ex-rodeo clown, “a studded soul” with “cracked ribs” from the “monster bull” who “flung him up like a cat toy” in a career-ending incident that left him “[seeing] the stars of Texas” (“Buckeye Bronson’”), and then, as Manier records the antics of ghosts as they dance among folks in the diner, she makes her work universal by revealing pain both in a man who resembles the father of the speaker and in her own vulnerable soul.

She shows us her own haunting pain and—if this emotionally autobiographical, as I suspect it is—reminds us by doing so of how our own “ghosts” shape us into the people we are. She reminds us that we cannot outrun our pasts, for a memory can slay us at an inopportune moment like the one on the man’s face she sees who reminds her of “[her] Father’s face / before [she] got on the plane.” Here she is, unable to do anything but “excuse herself to the bathroom” and cling to the “handicap” bar, when

But frivolity, often in the form of flirtation, exists amid life’s pain and drama. A group of nurses, “tattooed with glory and grief,” smile “sugar tea smiles” at truckers and sing “to the juke box.” as they “pluck the bones of living prayer out / of their teeth.” Manier wonders if they “see their own beauty.” (“Apron Angels”) Isn’t this at least a search for happiness?

Jermaine Coleman “lights all her hormones up” when a man she calls “Tall Black Coffee” enters the diner from out of the rain, leaving the cab running because he isn’t planning to stay. His reply to where he’s been is noncommittal: “around.” Jermaine leaves with his coffee and the burdens life gives him. The cab he arrived in cannot “drive [him] out of his past. (“Tall Black Coffee”)

The one-handed waiter is “pissed” and wants the poet to hurry “his poem” along to make him a “hero.” A second waiter makes a joke about juggling to “loosen up [the one-handed’s] pride,” when he catches the falling creamer. Neither of them is a “heroic firefighter,” but the one Manier is writing about is “support[ing his] four [children],” which makes him hero “enough.” (“In the Line of Duty”)

Jokes and smiles break the tension and lighten the mood in the diner, as they do in much of daily life, but is there joy in the lives of these ordinary folks who wander in and out of diners?

Take Rocket Jones, for example, who “put[s] on his glasses to read [the menu]” then hides them away to try to conceal his age. Does he still feel like the ‘pretty boy” he was? When the jukebox plays, he “tap[s] his straw … into a heavy shade of sadness,” for oh! “passion [has] caught him up….” (“Rocket Jones”)

The poem “Untold Story” tells a lot. The poet /narrator has “spiked in [her] hound senses” as she waits for input only to realize “maybe tonight / [she’s] the fallen hero.” Fallen, yes. (And perhaps I’m reading a bit of myself into the book, for Manier employs the language of faith with ease and conviction.) But why “hero”? Why, indeed. And when will this book address joy?

Manier’s poems show rather than tell. Her poems are set in various diners under the nighttime sky. The world is always different at night, glare more august, contrast more extreme. A prostitute and a family of Muslims are in the “same alleyway,” where she “wash[es] / her mouth our with soda / after business,” and they, “on a blanket beside / the dumpster,” pray as they face Mecca.

Time isn’t laid out tick for tock….
It’s tangled.
All over itself,
the past, the future, the present….

I am struck by Holy lightening
as the past kisses the present….
Time washing through me
like baptism.
(“Holy Whores’)

There is more. Manier’s book includes the joy of a prayer.

Thank God,
this place exists,
Where the lonely,
the hurt…
can come get called “sweetheart”…
(“For the Unnamed”)

My personal favorite among the many strong poems is “When Waffles Collide.” Surely, the poet (and certainly the editor) know how strong this poem is, for they placed it near the end of e collection. The poem is about the dignity of “being poor.” The “I” in the poem—maybe
Manier herself, (but it could be anyone with a bit of monetary good fortune)—takes a young man
out to eat at the “local Awful Waffle,” where he proclaims, “I don’t get to eat out much.” Later seeing a group of privileged young men mocking poor souls, she cannot swallow. She is trying to “reason with [the] bubbled lives [of the poor].” (“When Waffles Collide”)

Manier shapes her poems to indicate what she knows: true heroes—always fallen, always flawed and human—are like all of us. Pain, frivolity, and joy become past, present, and future stirred with a spoon just as they truly are in everyone. The word bubble (“When Waffles Collide”) does not dismiss a poor, troubled plight but neither does it allow poverty to define people.

Fallen Heroes of the Awful Waffle by Shane Manier is a thin volume, but oh! so worth the read.
Her poems make me cry because she has reminded me of how very glad I am to be human.